For a company to have sustainable cashflows, it needs to have a contract with its customers. This contract can be literal or metaphorical. If you rent out a property and have a long-term contract with the tenant, there is some certainty that you will receive your rental income in full and on time. However, contracts can be broken. Having a literal contract does not guarantee sustainable cashflows. It does however put the odds in your favour.

Metaphorical contracts are rare and harder to break because they are formed out of habits and convenience. Buffett once said, “the chains of habit are too light to be felt until they are too heavy to be broken”. Any company that can tap into these habit patterns is likely to have metaphorical contracts with its customers. Over time, habits passed from generation to generation can create a “Lindy effect”. Coined by the French polymath Benoit Mandelbrot, the Lindy effect states that the longer a story, idea or brand has survived, the more likely it is to survive in the future.

A 100 years from now, it is very likely that students will still study Shakespeare, children (and adults) will still enjoy Disney cartoons and a Patek Philippe will still be a family heirloom worth more than it was in the past.

One of our largest holdings, the Finsbury Growth and Income Trust, invests in companies with metaphorical contracts. Many of these companies are also “Lindy”. Its largest holding – Diageo, owns well known brands like Smirnoff, Johnnie Walker and Guinness. Let’s take a closer look at Guinness.

Guinness brewed its first ales 260 years ago in 1759. Over the last 44 years, the price of a pint of Guinness has increased by 1,862% while inflation has increased by 1,146%. In this period, the number of competing alcoholic beverages has also increased and yet Guinness has managed to increase prices above inflation without hurting sales. No one is contractually obliged to drink a Guinness, however many people do so regardless – an example of a brand that has metaphorical contracts with its customers. The compounding effect of time transforms this metaphorical contract into the Lindy effect. 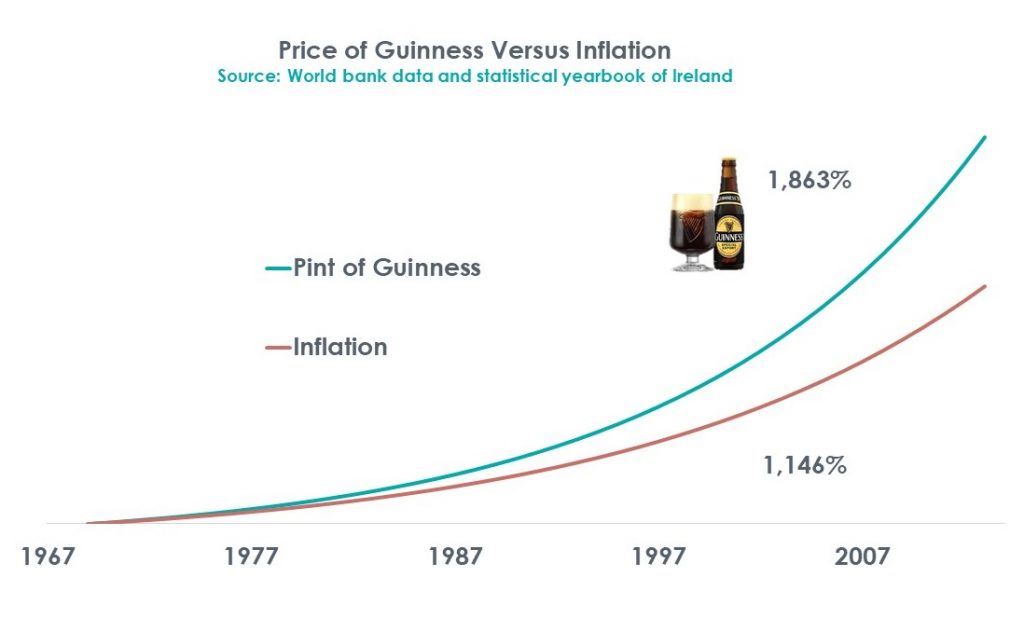 As with any other rule of thumb, the Lindy effect is not perfect. Changing consumer tastes and increased competition through the internet has severed the metaphorical contracts between some brands and their customers. A prime example of this is Marks and Spencer. Just like a tenancy contract, metaphorical contracts can also be broken.

Investing is less about certainties and more about probabilities. A company with metaphorical contracts whose products are “Lindy” does not guarantee success but it certainly reduces the probability of failure.

We recently wrote about the role of the Growth portion of our Stabiliser and Growth asset mix. The Growth component of the portfolio is ultimately responsible for, as the name implies, generating growth. It is mainly comprised of equities. A good framework for evaluating the future growth opportunities of a company or an industry is […]

Many years ago, C Northcote Parkinson examined company decision making in his still delightfully relevant book “Parkinson’s Law.” In the book he described how a company board could spend hours debating the merits of a proposal to give the employees a new coffee machine but could sign off on a new nuclear power plant in […]