Did you know that two things can be strongly correlated and yet completely independent of each other at the same time?

The website spurious correlations has a lengthy list of absurd correlations. For example, the number of Nicholas Cage films in a year is strongly correlated to the number of visitors to SeaWorld California.  Here’s another. Per capita margarine consumption is correlated with divorce rates in Maine.

Now maybe watching a Nicholas cage film does inspire people to visit SeaWorld. Or maybe it’s all an American thing? I wonder if there’s a correlation between British people who go on holiday and Royal Weddings!

The explanation is, prepare yourself, pure coincidence.

But, look at this graphic. Interest rates appear strongly correlated with the height of the Chairman of the American Federal Reserve. Remarkable! 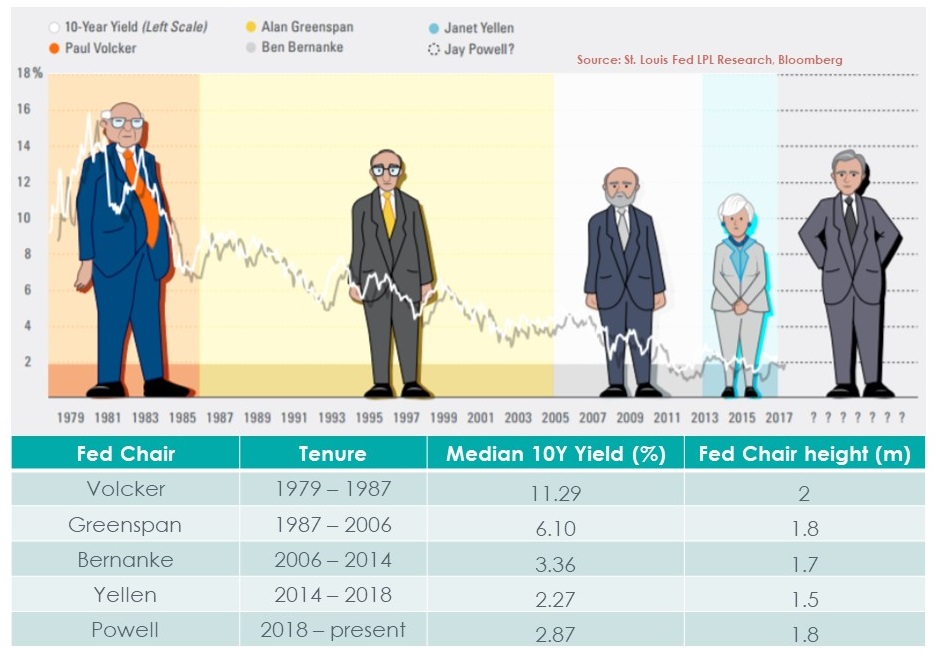 So, using this logic, should we now forecast that interest rates will rise? There’s no question that the height of the Fed chairman between 1979 – 2018 is illuminating.

However, it’s pure coincidence of course. The two variables are completely independent. Also, the sample size of 5 different tenures is small and statistically insignificant. So, most of us will say the correlation is meaningless. We just know it.

But are we right to trust our intuition? Psychologist Daniel Kahneman, a worldwide expert of judgment and decision says no. Read this statement.

People living in small rural towns in Britain are healthier

We can easily reason why this may be so. Perhaps there’s less pollution, less stress and people eat more fresh fruit and vegetables in smaller towns.

Now consider the opposite.

Again, it’s not difficult to find reasons why this is the case – poor access to medical facilities, increased alcohol and tobacco consumption and so on.

Reality is less intriguing. The healthiest and least healthy towns will always be smaller. It’s a statistical fact that small sample sizes lead to extreme results.

This shows we can be misled and probabilities are important in understanding outcomes.

What will happen to interest rates in the coming months – who knows? Mind you, it’s good to know that the current chairman is not as tall as Paul Volcker.

Consider You May Be Wrong

To manage the funds that are entrusted to us we have to build a model of how we think the world economy is working. The inputs into that model are multi-variate; some are quantitative, and some are qualitative. Quantitative inputs include the level of interest rates, cost of capital, expected inflation rates, implied discount rates, […]

Robert Heinlein, one of the most prolific sci-fi authors of all time, was a sceptic of specialisation. To quote: “A human being should be able to change a diaper, plan an invasion, butcher a hog, conn a ship, design a building, write a sonnet, balance accounts, build a wall, set a bone, comfort the dying, […]