Over the last few days, the news has been largely negative – from the rising risks of a no-deal Brexit to Boris Johnson’s suspension of parliament and a falling sterling. We have highlighted many times before that the noise created by political events must be blocked out when making longer term investment decisions, no matter how difficult this may be at times such as now.

Political events affect market prices, both for the worse and sometimes for the better. For example, our exposure to Stabilisers during the past few weeks have helped mitigate losses whilst our focus on the valuations of equities have led us to also limit losses in all of our strategies. In fact, our Stabilisers have completely offset the volatility in equity markets for all but our highest risk strategy.

Now on to the opportunity the current market environment has produced for investors. The Figure below shows just some of the major buyouts of UK companies and the premiums paid for them this year so far. 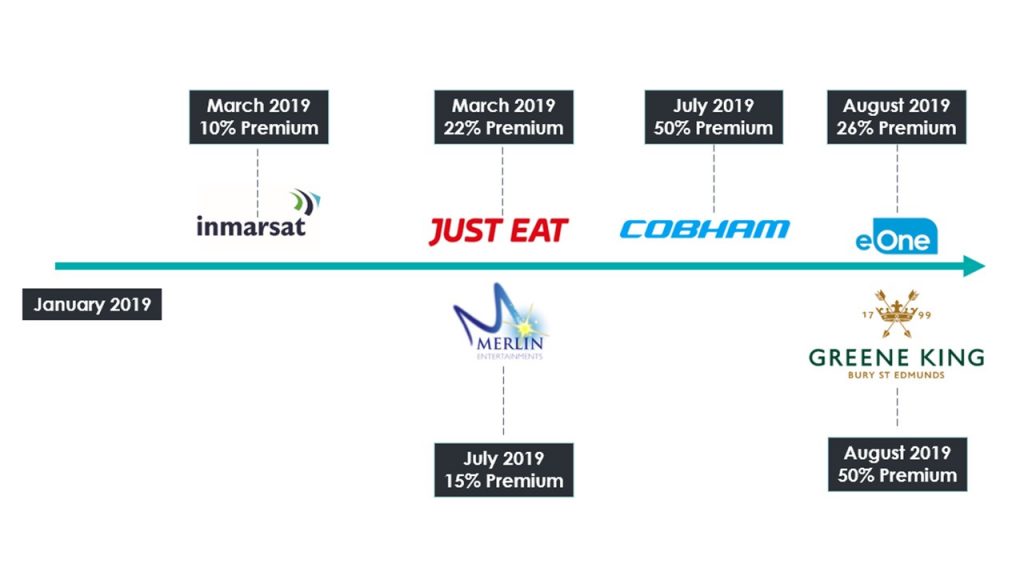 As the year has progressed, the premiums paid by acquirers have slowly risen. This is likely to be caused by cheaper valuations and a cheaper sterling. What does this premium mean in practical terms? When an acquisition offer is made for a public company, it is usually made above its current stock price.

For example, the aerospace and defence company – Cobham was acquired by the private equity firm Advent in July 2019 at a 50% premium to its stock price. This had the effect of increasing its stock price by 50%.

However, it is possible that the stock price can rise above the bid price offered by the buyer. This happened with Entertainment One (eOne) in August. Entertainment One owns the rights to the widely popular children’s cartoon – Peppa pig. The acquirer bid £5.60 per share to buy Entertainment One however the company currently trades at £5.83, implying that the market believes this bid was cheap and a higher bid could be made to buy the company.

All of the companies shown in the Figure above (except Greene King) make a majority or a plurality of their sales outside of the UK meaning their performance is not tightly tethered to the performance of the UK economy. Over 95% of Inmarsat’s sales are outside the UK. For Merlin Entertainment it’s 70%. For Just Eat it’s 51%. For Cobham it’s 47% and for Entertainment One, over 90% of sales are made outside the UK.

Why is all this important? While the rhetoric around UK assets has been negative, it is important for investors to understand the natural hedge present in Tacit’s strategies.

Owning a diversified basket of UK listed companies with limited exposure to the UK economy reduces the risks associated with a no-deal Brexit. Also, having exposure to quality small and mid-cap UK stocks at cheap valuations combined with a cheap sterling increases the probability that a private equity buyer will bid for them at high premiums. This, combined with our stabiliser assets is our hedge against uncertainty.

The major consequence of the global financial crisis in 2008 was a decade of “austerity” where the excesses of global finance in the run up to the crisis were paid for in a decade of cuts to public budgets. In the famous formulation of the time, “profits were privatised but losses were socialised.” Having lived […]

The Value of Growth

A lot of investors are familiar with Benjamin Graham – the father of security analysis and Warren Buffett’s mentor and first employer. Benjamin Graham popularised a style of investing called value investing. Its basic premise is that if you buy an asset at a discount to a conservative estimate of its value, you are likely […]